A History of the Disabilities Rights Movement

A History of the Disabilities Rights Movement

Our feature from September 2014:

September is National Spinal Cord Injury Awareness Month, and throughout the month we would like to take a look at the history of disabilities awareness, and public access in the US.  It is easy to focus on the Americans with Disabilities Act (ADA) as the defining moment in the history of disabilities rights.  This is because the act is such a radical change from previous government policy, and provides the written presentation of basic civil rights that have not always been provided to individuals with disabilities.  Like the well known civil rights movement of the 1960’s, the Disabilities Rights Movement was a long arduous process marked by many shameful moments in US history.  Yet, there were also many heroes, those who pushed for equal rights and lobbied for advancements in the treatment of individuals with disabilities.  Some of these people have been forgotten throughout history, but we would like to celebrate them.  In future posts this month we will look at the ADA and its impact on the US today, but it is important to first take a look back into the history that led to the passing of the ADA.

“Study the past if you would define the future”. – Confucius 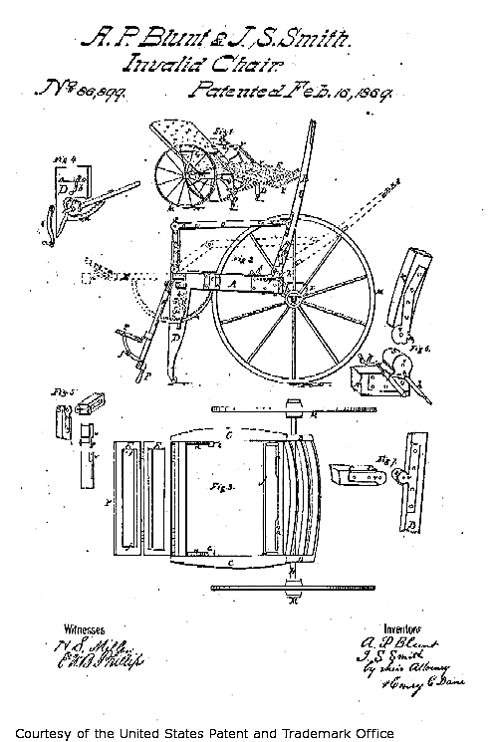 The dated patent for an “Invalid Chair”

The first significant date in our discussion is Feb 16th, 1869 when A.P. Blunt, and J.S. Smith registered the first US patent of what we now call the wheelchair.  As you can see from the image here, their terminology is a clear mark of the attitude held toward disabilities in the time that they lived in. Yet, the invention of such a chair was a great leap forward for individuals with physical disabilities.  Later, in 1909, the first folding wheelchairs began to be introduced for people with mobility disabilities.  Additionally, in 1937, Herbert A. Everest, and Harry C. Jennings patented a design for a folding wheelchair with an x-frame which could be packed into a car trunk.  These innovations in wheelchair design, along with the eventual development of the electric wheelchair allowed individuals with spinal cord injuries, and others, to have more mobility in their lives.

In 1933, Franklin Delano Roosevelt became the first seriously physically disabled person to be elected as President of the United States.  It was during his first term in office that The League of the Physically Handicapped was formed in New York City.  The purpose of this organization was to protest discrimination against people with disabilities by federal relief programs.  The group was one of the first of its kind to organize sit-ins, picket lines, and demonstrations, and to travel to Washington, D.C., in order to protest and meet with officials of the Roosevelt administration.

Opening Ceremonies of the 1960 Paralympic Games

Following the rise in veterans who were returning injured after WWII, the sport of wheelchair basketball arose as a way for veterans to release much pent up energy.  In 1949 the first Annual Wheelchair Basketball Tournament was held in Galesburg, Illinois.  Wheelchair basketball, and other sports, became an important part of disability lifestyle and culture over the next several decades.  The first National Wheelchair Games in the United States were held at Adelphi College in Garden City, New York in 1957, and the first Paralympic Games were held in Rome, Italy in 1960.

Throughout the fifties, and into the sixties the African American Civil Rights Movement was also raging on.  There were two primary successes of this movement which relate to the Disabilities Rights Movement directly.  The 1954 court decision of Brown vs. The Board of Education, ruled that separate schools for black and white children are inherently unequal and unconstitutional.  This ruling served as the inspiration for the Disabilities Rights Movement later on.  The second success I’m referring to is the 1964 Civil Rights Act, which outlawed discrimination on the basis of race in public accommodations and employment, as well as in federally assisted programs.  This became a model for subsequent disability rights legislation.

The 1960’s were years of great change in our country, and this was true of our movement as well.  There were several key events which affected a new focus on public access.  In 1961, the American National Standards Institute, Inc. (ANSI) published American Standard Specifications for Making Buildings Accessible to, and Usable by, the Physically Handicapped.  This landmark document became the basis for all subsequent architectural access codes.  Following this, The Architectural Barriers Act was passed in 1968.  This act is generally considered to be the first ever federal disability rights legislation, and it mandated that federally constructed buildings and facilities be accessible to people with physical disabilities. 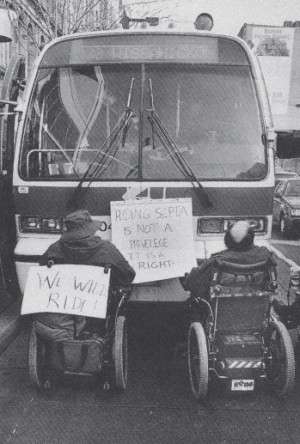 The Disabilities Rights Movement enjoyed a series of successes in the 1970’s but these years also came with great struggle for public access.  In 1970, Congress passed the Urban Mass Transportation Assistance Act, declaring it a “national policy that elderly and handicapped persons have the same right as other persons to utilize mass transportation facilities and services.”  However, this act had little success because it lacked any provision of enforcement.  Because of this, many sources of public transportation did not heed the act.  In 1972, the Paralyzed Veterans of America, the National Paraplegia Foundation, and Richard Heddinger filed suit to force the Washington Metropolitan Area Transit Authority to incorporate access into their design for a new, multibillion-dollar subway system in Washington, D.C.  Their eventual victory became a landmark in the struggle for accessible public mass transit.  Still others fought for the right to public transportation throughout the decade.  In 1976, The Transbus group, made up of Disabled in Action of Pennsylvania, the American Coalition of Cerebral Palsy Associations, and others, and represented by the Public Interest Law Center of Philadelphia, filed suit (Disabled in Action of Pennsylvania, Inc. v. Coleman) to require that all buses purchased by public transit authorities receiving federal funds meet Transbus specifications, making them wheelchair accessible.  Also, in 1978, disability rights activists in Denver staged a sit-in demonstration, blocking several Denver Regional Transit Authority buses, to protest the complete inaccessibility of that city’s mass transit system. This demonstration was the first action in a year long civil disobedience campaign to force the Denver Transit Authority to purchase wheelchair lift-equipped buses.

Perhaps the biggest success of the decade was when the Rehabilitation Act of 1973 was passed.  For the first time this act confronted discrimination against people with disabilities.  Section 504 prohibits programs receiving federal funds from discriminating against “otherwise qualified handicapped” individuals and sparks the formation of “504 workshops” and numerous grassroots organizations.  Disability rights activism seized on the act as a powerful tool and made the signing of regulations to implement Section 504 a top priority. Litigation which arose out of Section 504 generated such central disability rights concepts as “reasonable modification,” “reasonable accommodation,” and “undue burden,” which formed the framework for subsequent federal law, especially the Americans with Disabilities Act of 1990.

Yet, after all of the successes of the 70’s, the early 1980’s brought about harsh changes for individuals with disabilities.  From 1981 to 1983, the newly elected Reagan Administration threatened to amend or revoke regulations implementing Section 504 of the Rehabilitation Act of 1973 and the Education for All Handicapped Children Act of 1975.  Disability rights advocates, led by Patrisha Wright at the Disability Rights Education and Defense Fund (DREDF) and Evan Kemp, Jr. at the Disability Rights Center, responded with an intensive lobbying effort and a grassroots campaign that generated more than 40,000 cards and letters. After three years, the Reagan Administration abandoned its attempts to revoke or amend the regulations.  However, during these years the Reagan Administration also terminated the Social Security benefits of hundreds of thousands of disabled recipients.  Advocates said that these terminations were in an effort to reduce the federal budget and often didn’t reflect any improvement in the condition of those being terminated.  A variety of groups sprang up to fight these terminations.  As a result of this termination several disabled people, in despair over the loss of benefits, committed suicide.

In the final years leading up to the passage of ADA in 1990, several activists called for changes to existing legislation.  In Denver (again) in 1983, American Disabled for Accessible Public Transit (ADAPT) was organized at the Atlantis Community Headquarters.  For the next seven years ADAPT conducted a civil disobedience campaign against the American Public Transit Association (APTA) and various local public transit authorities to protest the lack of accessible public transportation.  Also in 1983, The National Council on the Handicapped issued a call for Congress to “act forthwith to include persons with disabilities in the Civil Rights Act of 1964 and other civil and voting rights legislation and regulations.” In 1986, The Air Carrier Access Act was passed, prohibiting airlines from refusing to serve people simply because they are disabled, and from charging them more for airfare than non-disabled travelers.  Also in 1986, The National Council on the Handicapped issued Toward Independence, a report outlining the legal status of Americans with disabilities, documenting the existence of discrimination and citing the need for federal civil rights legislation (what was eventually passed as the Americans with Disabilities Act of 1990).  In 1989, the original version of the American with Disabilities Act, was redrafted and reintroduced.  Disability organizations across the country advocated on its behalf with Patrisha Wright as “general” and Marilyn Golden, Liz Savage, Justin Dart Jr., and Elizabeth Boggs as principal coordinators of this effort.

In 1990, the Wheels of Justice campaign in Washington, D.C., organized by ADAPT, brought hundreds of disabled people to the nation’s capital in support of the ADA.  ADAPT activists occupied the Capitol rotunda, and were arrested when they refused to leave.

Finally, The Americans with Disabilities Act was signed by President George Bush on July 26th in a ceremony on the White House lawn witnessed by thousands of disability rights activists.  The law was and is the most sweeping disability rights legislation in history, for the first time bringing full legal citizenship to Americans with disabilities.  It mandates that local, state, and federal governments and programs be accessible, that businesses with more than 15 employees make “reasonable accommodations” for disabled workers, that public accommodations such as restaurants and stores make “reasonable modifications” to ensure access for disabled members of the public. The act also mandates access in public transportation, communication, and in other areas of public life.

I hope that this has been an eye opening look at the struggles, set-backs, and successes that have occurred throughout the history of the Disabilities Rights Movement.  However groundbreaking ADA is, it is important to remember the history that led up to its signing.

Thank you for reading, and please continue to follow us on Facebook and Twitter throughout the month of September to learn about our upcoming events and to see what fun things we are up to. 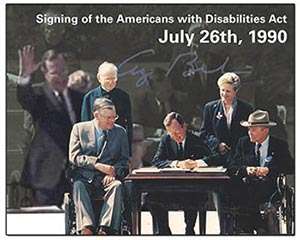 (Sources: Disability Rights Movement Timeline, The History of the ADA )