The fourth annual Roll on Capitol Hill (ROCH) and Advocacy Conference was held this year from June 7th to June 10th, and for the second year in a row members of the I AM group attended.  Recently, I had a chance to speak with Holly Petro, and Mike Pellicano about their experience in Washington, D.C.  The ROCH is an event sponsored by United Spinal with the goal of addressing issues and policies that impact the health, independence, and quality of life of individuals living with spinal cord injuries or disorders.  It took on special importance this year, with the celebration of the 25th Anniversary of the ADA. 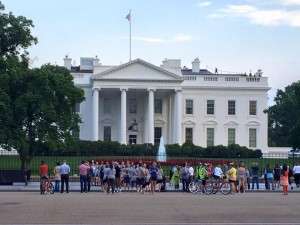 This four day event calls upon attendees to advocate for the issues that are most currently developing on Capitol Hill.  Each day of the event had something new in store.  While the first day was set aside for arrivals, followed by a welcome reception, the next three days were full of action.  Holly and Mike, along with members of their families and other attendees, spent Monday in a classroom-like setting where they learned about bills currently in legislation and about how to advocate successfully for these issues.  In groups based on state districts, some of the issues that were covered included separate recognition for complex rehab technology under Medicare, the Congressional Bipartisan Disabilities Caucus, the Safe Streets Act of 2015, and access to safe and effective biologic and biosimilar medicines.

On Tuesday, primed with their new advocacy training, Holly and Mike participated in three Capitol Hill Meetings each.  They were each paired with another person from their district, or at least from PA, and left to visit offices throughout D.C.  Essentially, the goal was to meet with Congressional representatives, or in many cases their staff, and to inform them of the importance of each of the bills or topics on the agenda.  The hope is that the advocates make an impression on the representatives so that they will offer their support for the bills in legislation.  This can be a challenging thing to accomplish. 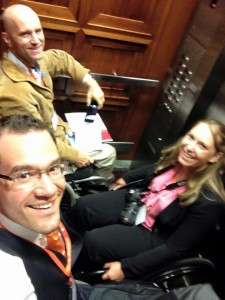 “I was nervous about remembering everything.  I thought, ‘Am I going to be memorable enough,” said Holly.  The nice thing about the ROCH, however, is that no one had to go it alone.  And so, paired with the President of the Pittsburgh Chapter of United Spinal, and later with a representative from California, Holly made it through with a new perspective in the end.  “The whole process was impactful, interesting, and educational, and it made me more motivated,” said Holly.  For her, “it was a spark” and it “helped me feel that even if I could just help one person it would make a difference.”

For Mike Pellicano, the ROCH took his passion for advocacy to a new level.  Mike is someone who is interested in many of these issues in Pennsylvania, but being in Capitol Hill allowed him to explore these issues on a national level.  Also, Mike was able to meet other advocates who are just as passionate.  One such man spent several years rallying for state-funded grants for spinal cord research in Minnesota.  “It was great to meet so many interesting people, all with different levels of injuries, and from places all over the United States,” said Mike. 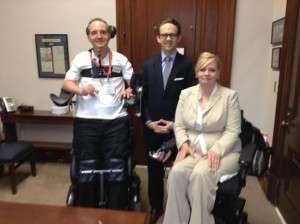 When all was said and done, Tuesday was all about the representative’s views on the various issues.  “You should know where they stand,” said Mike.  In talking with Holly and Mike they assured me that most of the staff they met with were very nice.  “I was a little surprised and disappointed that we only got to meet with staffers, and not representatives, but overall it was a good experience,” said Holly.

Later on Tuesday, a Congressional Awards Reception was held in order to honor one Senator and two House Representatives.  Rep. Tammy Duckworth (IL) received the 2015 Disability Rights Champion Award for her role in expanding the rights of veterans, veterans with disabilities, and the broader disability community.  Rep. Rob Wittman (VA) received the 2015 Vets First Congressional Bronze Star Award for his efforts to increase opportunities for veterans living with disabilities and to help them reintegrate into their communities.  And, finally, Senator Patty Murray (WA) was presented with the 2015 Outstanding Congressional Leadership Award for her extensive leadership and vocal support of disability issues.  United Spinal also honored consumer advocate Willis Washington who received the 2015 Advocate of the Year Award for his years of effective advocacy on behalf of people with disabilities, not only in his own state of Oklahoma, but across the country.

Overall, the 2015 Roll on Capitol Hill was a successful gathering.  Both Holly, and Mike say that they would love to go again.

I’d like to thank Mike and Holly for chatting with me about the event.  In addition, I thought it would be nice to post a link to some of the bills that were being discussed.  Feel free to click the links below, and read up on the issues that are up legislation.  At each link there is a list of sponsors of the bill, so you can check and see if your local representatives have added their names yet.  As Mike said, “It’s important to know where they stand.”   Lastly, we would like to encourage you to do more research on these and other issues.  It is always good to be informed, and to know what your representatives are doing for you.